Kakuro, or Cross Sums, are more like traditional math games than Sudoku.

Traditional math games require addition and subtraction operations as a bare minimum, that is

why we feel that Kakuro ( or Cross Sums), though not quite as popular, are certainly more like 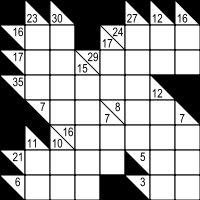 Comes from the Japanese expression for 'cross addition' ( kasan kurosu, (加算クロス), or simply abbreviated, KA-KURO. Like it's cousin Sudoku, Kakuro uses a grid ( though typically 16 x 16), other grid sizes are also possible. The clues in Kakuro math games consist of numbers, arranged in the grid , as shown to the right.

The object is to solve the 'clues', using only the numbers 1-9, one number per cell, such that the sum of the numbers in each entry match the associated clues, and that no digit is repeated in any single entry.

Remember the 'clues' , which are the numbers in triangular boxes

in the the grid, are referred to by their number and then the number of

cells included to solve it. So we would call the clue in the top left corner

(Three referring to the number of cells ( or numbers needed to solve the clue)).

Having played Kakuro for more than 30 years , I can tell you their are certain

patterns, or clues which have the same answers , no matter what.

Learning or understanding such patterns is vital in solving Kakuro puzzles.

Here are the patterns

Armed with the above patterns, we can now develop some solid Kakuro

If you try to fail and succeed, what have you done?

If we are here to help others, what are the others here for?

If you have a bunch of odds and ends and throw away all but one, what do you have left?

Would a fly without wings be called a walk?

Why is 'abbreviation ' such a long word?

What was the best thing 'before' sliced bread?

Why isn't there mouse-flavored cat food?

Why is the person who invests your money called a broker?