Basically it is a pictogram, mixing symbolism to represent words.

By definition : A rebus is an indirect reference device that uses pictures to represent words or parts of words. Such representations are often found today in the form of puzzles. It was also a favorite form of expression in the old world, used in the Middle Ages to denote surnames.

A modern day example of a Rebus as word play.

In the diagram the word HEAR is represented as The letter H + The picture of the EAR, thus we have H - E - A - R.

The term rebus also refers to the use of a pictograph to represent a syllabic sound . This adapts pictograms into phonograms( symbol standing for a sound ) . A precursor to the development of the alphabet, this process represents one of the most important developments of writing . Fully developed hieroglyphs read in rebus fashion were in use at Abydos in Egypt as early as 3400 BCE

The writing of correspondence in rebus form became popular in the 18th century and continued into the 19th century. Lewis Carroll wrote the children he befriended picture-puzzle rebus letters, nonsense letters, and looking-glass letters, which had to be held in front of a mirror to be readRebus letters served either as a sort of code or simply as a pastime 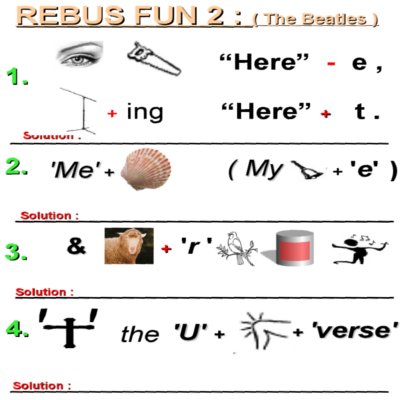 These Rebus Pictogram Puzzles can be downloaded and printed to your PC:

If you like Rebus, you may also enjoy these puzzles: HIDDEN MEANING

If you try to fail and succeed, what have you done?

If we are here to help others, what are the others here for?

If you have a bunch of odds and ends and throw away all but one, what do you have left?

Would a fly without wings be called a walk?

Why is 'abbreviation ' such a long word?

What was the best thing 'before' sliced bread?

Why isn't there mouse-flavored cat food?

Why is the person who invests your money called a broker?